The Identifier for Advertisers (IDFA) is a GUID assigned to Apple iOS devices that allows advertisers to track a user across multiple apps (introduced in iOS 6). Users have been able to reset, or opt-out of sharing, their IDFA at any time by going to Settings > Privacy > Advertising. 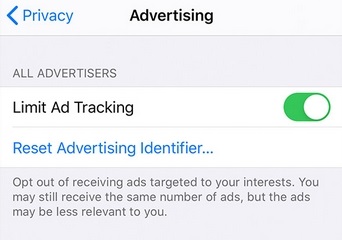 Enabling Limit Ad Tracking (LAT) would simply inform apps that the user did not want to be tracked. However, it was common that advertisers ignored this request, so starting from iOS 10 users that had LAT enabled resulted in a zeroed-out GUID returned to apps.

Among the privacy changes Apple introduced in iOS 14 was a new IDFA permission that users would have to explicitly opt-into. Similar to other permission requests (location, camera, microphone, etc.), this will present a once-off dialog. The text outlined in red is configurable. 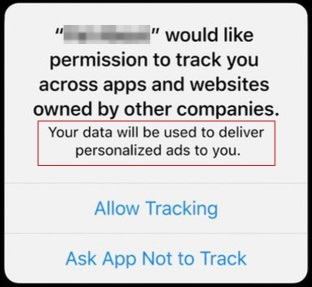 This dialog will only be presented if Allow Apps to Request to Track is enabled under Settings > Privacy > Tracking. This setting screen replaces the LAT and Reset Advertising Identifier options found in previous iOS versions. 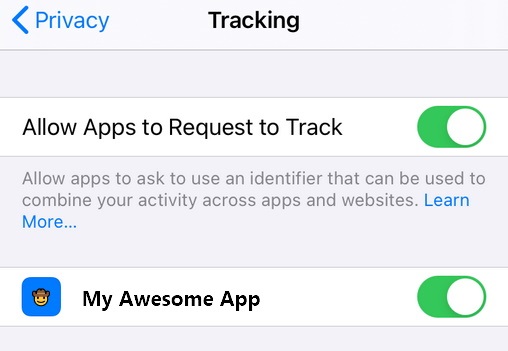 If apps are not allowed to request tracking they will get the zeroed out IDFA. Any apps that have been granted, or denied permission, will be displayed in the same screen and can at anytime have their access manually revoked or granted by the toggle on the right.

Interestingly it seems if the user revokes permission via the toggle for any app it will trigger an IDFA reset for the device.

For the moment there is a stay of execution requiring IDFA permission until early 2021, meaning that access is unchanged from iOS 13.

I use Google AdMob to monetise one of my apps, which makes use of IDFA behind the scenes. A week ago I released an update that requests the new IDFA permission as a little experiment to gauge user response. In that time the new IDFA dialog has been shown to approximately 1000 users. The returned status of the request can be either,

NotDetermined will eventually return a zeroed-out IDFA once the stay of execution is removed in early 2021. Restricted indicates that no dialog was shown and Allow Apps To Request To Track is disabled and cannot be changed; this can occur when the user is underage, or the device is managed by an organisation/school.

So what happened when I requested IDFA permission from 1000 of my users,

Does this mark the end of monetisation through advertising on iOS? Let’s compare the eCPM (estimated earnings accrued for every 1000 impressions that an ad receives) of the previous and current version of my app over the last seven days.

Well… that was unexpected, eCPM increased by 2.7%!

The figures above may change over time and are not representative of what other apps might experience, but my impression is that the IDFA apocalypse may be exaggerated. Mobile advertising is not going away and the increased restrictions around the IDFA is only the next step in an ongoing cat and mouse game between advertisers and user privacy.

One clear take away from my perspective is that requesting the IDFA permission is useless, you’ll be lucky to get an authorised response. My next app release will not bother to annoy users with this extra dialog.

Disclaimer: None of this should be taken as gospel, just my experience so far with the changes to the IDFA in iOS 14, your mileage may vary!